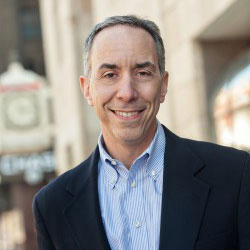 Chris Rizik is the Chief Executive Officer of the Renaissance Venture Capital Fund, a venture capital fund of funds formed by a consortium of several of Michigan’s largest organizations. Chris is also a co-founder, partner, and Board chair of nanotechnology holding company Ardesta, LLC, and was previously a Managing Director of Avalon Technology fund, which was Michigan’s largest venture capital fund and the recipient of four consecutive “Deal of the Year” awards by the Michigan Venture Capital Association.

Prior to joining Avalon, Chris was a senior partner with Dickinson Wright PLLC, one of the Midwest’s oldest law firms. He also passed the Certified Public Accounting examination and worked at PriceWaterhouse Coopers. Chris is also the founder and publisher of SoulTracks.com, America’s most popular soul music online magazine.

Chris currently serves as a member of the Executive Committee and is the Finance Subcommittee Chair of the Michigan Economic Development Corporation. He is also a member of the Advisory Board of the Detroit Medical Center. He chairs the Executive Committee of TechTown (the Detroit high tech accelerator) and the Investment Committee of the First Step Fund and is past Chairman of the State of Michigan’s advanced energy accelerator, NextEnergy. Chris also serves on the Steering Committee of the New Economy Initiative and the board of U of D Jesuit High School and several venture capital funds. In 2010, Chris was named by Crain’s Detroit Business magazine as one of its “Newsmakers of the Year” for his leadership role in the advancement of venture capital and entrepreneurship in Michigan.