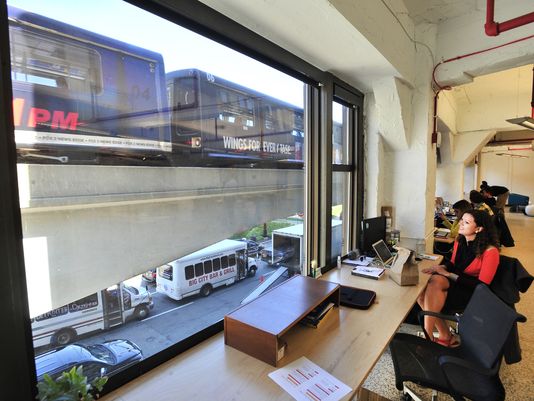 Jennifer Chambers, of The Detroit News,explores NEI’s Street Level, co-working week and the host of unique co-working spaces throughout Detroit.

Jake L’Ecuyer admits he can’t work from home or a coffee shop — too distracting and other times too sterile for the 25-year-old recruiter at Venture for America.

That’s why L’Ecuyer set up shop on the second floor of Grand Circus Detroit, one of several co-working spaces popping up across downtown Detroit and Midtown where fellow entrepreneurs rent office space by the day or month.

Here the building provides tables, chairs, wifi and meeting rooms in a wide open space overlooking Grand Circus Park — and something else L’Ecuyer craves: the energy that comes from collaborating with other entrepreneurs.

“It’s great here. Just working in a room alone, you go nuts. I’m not around my team,” L’Ecuyer says, laptop open and earbuds laying on his shoulder. “Having people around me talking and shooting the breeze and kind of stretching my legs, I think it’s fun. If I need to lock down, I throw my headphones on.”

Also among the entrepreneurs at Grand Circus are members of the New Economy Initiative, a philanthropic program in Detroit that helps serve entrepreneurs by connecting them with services to grow their companies.

As part of their new initiative called “NEI Street Level,” NEI staff members have embedded themselves into Detroit’s coworking spaces to provide NEI with a better understanding of the real, everyday challenges and needs of Detroit’s entrepreneur community and help better connect that community through its work.

NEI will be working in multiple shared spaces on a rotating schedule for a few days a week, over the next two to three years, to understand how entrepreneur can be better served.

“We want to take this very rich ecosystem of service providers and create a fully functioning network that behaves like a single organism,” Egner said.

“The reality is they way we’ve funded over the years, we’ve cause them to compete with one another…Now want to say let’s take what you are good at, let you focus on that and refer you to someone else to do the other work you need,” Egner said.

Jim Boyle, senior program officer at NEI, said by 2020 more than 40 percent of American’s workforce will be freelance in one form or another, so the spaces that foster those relationships will be more important than ever.

He pointed to a report in Forbes magazine in February that said co-working spaces have increased by 400 percent in the last few years because they offer what forward-thinking entrepreneurs are looking for – community and collaboration.

“A lot is happening. It started in central downtown but the trend is moving out into neighborhood areas where they can have a place to work other than home. They can collide and collaborate with other like minded businesses and this is where connections happen that grow businesses, that grow customer bases that help find vendors to service whatever products you need,” Boyle said.

Chioke Mose-Telesford, with community programs at Grand Circus, said some renters of shared spaces are here for a month. Some purchase day passes just to get out of their office environment or to hold an off-site meeting.

Across multiple floors, Grand Circus offers three large rooms including a “living room” with couches. There are telephone rooms with bright red doors. Conference phones and dry erase boards allow workers to write on the wall when brain storming, she said.

“What I find pretty cool is you have all these people working on pretty cool initiatives, all them pretty different. There is definitely room for collaboration and people just bouncing ideas off each other,” Mose-Telesford said.

Egner said climbing out of his ivory tower as a grant maker and settling into a downtown Detroit co-working space crawling with entrepreneurs definitely gave him a new perspective.

“The energy level is very high here. My office is very quiet back at 333 W. Fort. This is a very different feeling, more energized. You feel naked sometimes out in the middle of the room. That is a part of the collision factory we are trying to create where people are bumping into each other. We need to be bumped into,” Egner said.

Organized through Co-Lab Detroit and sponsored by NEI, Detroit Co-Working Week will include a number of speaker series and open houses throughout many of Detroit’s co-working and shared spaces.

Throughout the NEI Street Level program, the NEI team will share updates on its experiences, connections and outcomes through blog posts on its website at NewEconomyInitiative.org.

“Detroit Co-Working Week” is from Oct. 20-24. Organized through Co-Lab Detroit and sponsored by New Economy Initiative, the week will include a number of speaker series and open houses throughout several Detroit’s co-working and shared spaces.

Model D and Southeast Michigan Startup will host a free panel discussion about the emerging culture of Detroit’s co-working spaces on Oct. 22.