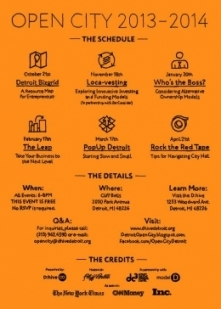 NEI’s work is to strengthen institutions and organizations that have the largest impact on entrepreneurial activity, and creates stronger connections to the other organizations inside that network.

NEI is proud to be a sponsor of the upcoming BrandCamp Conference, taking place in Detroit on Oct 22nd.

Open City Detroit, a monthly networking event for entrepreneurs presented by D:hive, kicks off its 2013-2014 season with its first event on Oct 21st, where the topic of conversation will be the BizGrid.

NEI is excited to attend the Detroit+Toronto Symposium in late October, where our Executive Director David Egner will be speaking on a panel about innovation.