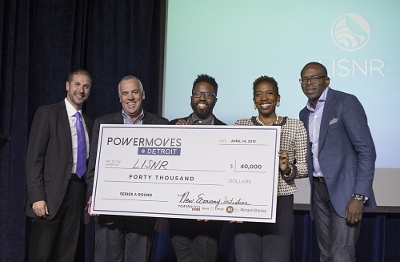 NEW ORLEANS, Nov. 20, 2015 /PRNewswire/ — LISNR, the creator of SmartTones, a new communication protocol that sends data over audio, recently announced that it closed $10 million in Series B funding. The company’s founder attributes participation PowerMoves@Detroit sponsored by Morgan Stanley as a flashpoint in the startup’s growth.

PowerMoves@Detroit is a program of PowerMoves.NOLA, a national initiative to increase the number of venture-backed, high growth and high tech companies in the United States led by entrepreneurs of color. In Detroit this past April, LISNR founder and CEO Rodney Williams and other nationally recruited entrepreneurs of color participated in venture capital pitch competitions, vying for cash prizes and a chance to raise their visibility to investors. LISNR was awarded the first prize and $40,000 in the Series A Morgan Stanley Power Pitch Competition.

Williams said, “This has been an incredible year for LISNR that was significantly accelerated by PowerMoves.NOLA and our win inDetroit. We always believed we had an incredible team and technology but we knew we needed a stage. We needed a stage to showcase and teach, and we knew the opportunities would follow. PowerMoves.NOLA and Morgan Stanley gave us that stage inDetroit. Within the five months post that event, we met Intel, validated our technology and they led our Series B closing at $10 million. It’s an absolute pleasure to share in mutual partnership and admiration with Intel. Thank you Morgan Stanley.”

Morgan Stanley is a Presenting Sponsor of PowerMoves.NOLA and sponsored PowerMoves@Detroit.

“It was our privilege to partner with PowerMoves and provide LISNR the opportunity to gain market exposure that helped the company expand. We not only seek to bring capital, relationships, and opportunities to leading emerging companies, but also provide our clients the opportunity to invest in these companies,” said Carla Harris, Vice Chairman, Global Wealth Management, Managing Director and Senior Client Advisor at Morgan Stanley.

Based in New Orleans, PowerMoves.NOLA is creating the necessary local, regional, and national infrastructure to attract new capital, increase investment opportunities, and generate comprehensive support for early stage entrepreneurs of color. LISNR was nationally sourced by the organization to participate in PowerMoves@Detroit and the organization’s annual national conference in July 2015.

“We vet hundreds of entrepreneurs of color each year, and LISNR immediately stood out as a viable business model,” said Earl Robinson, the president of PowerMoves.NOLA. “I am delighted that, through the support of Morgan Stanley, we were able to offer this startup a springboard to accelerate its success.”

About LISNR
LISNR is the creator of SmartTones, a new technology that sends data over audio. LISNR uses an inaudible digital sound file to turn any device into a beacon. LISNR gives brands and content creators a platform that delivers second-screen experiences and proximity-based messaging. For more information, visit http://www.lisnr.com.

About PowerMoves.NOLA
PowerMoves.NOLA is a national initiative to increase the number of venture-backed, high growth and high tech companies in the United States led by entrepreneurs of color. PowerMoves.NOLA is deploying innovative ideas, fresh approaches, and an overall commitment to equity and diversity as a growth strategy to address the generational obstacles that prevent inclusive entrepreneurship.